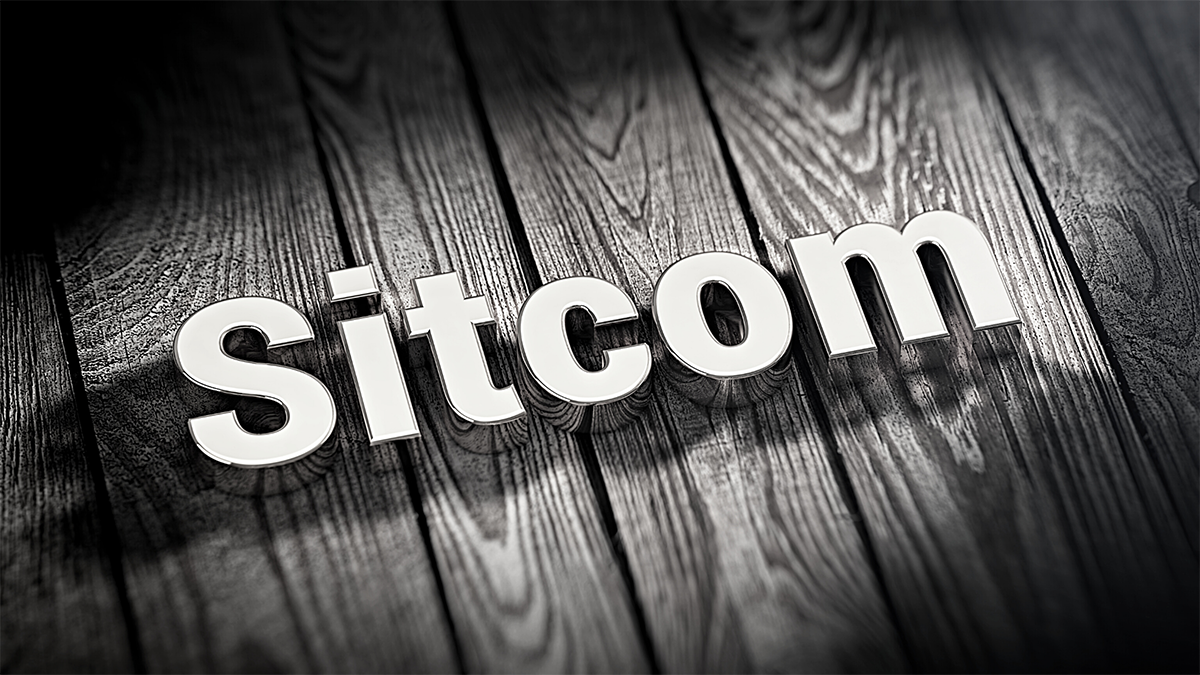 # What is the Half-Hour Sitcom?

The Half-Hour Sitcom Formula is essentially a blueprint designed to make sitcom writing seamless. Using the formula, writers are able to create episode after episode of any given sitcom television series and have each one feel unique while also following a fairly strict 20-30 minute time limit. The formula makes it easier for the writers to gauge where they need to place their exposition, conflict and resolution within the episode in order to keep their audience engaged, give the episode an even pace, and keep those laughs coming.

It’s no secret that the television industry is a booming one. We at PreWrite recognize that, and we want to help you develop your sitcom as painlessly as possible. 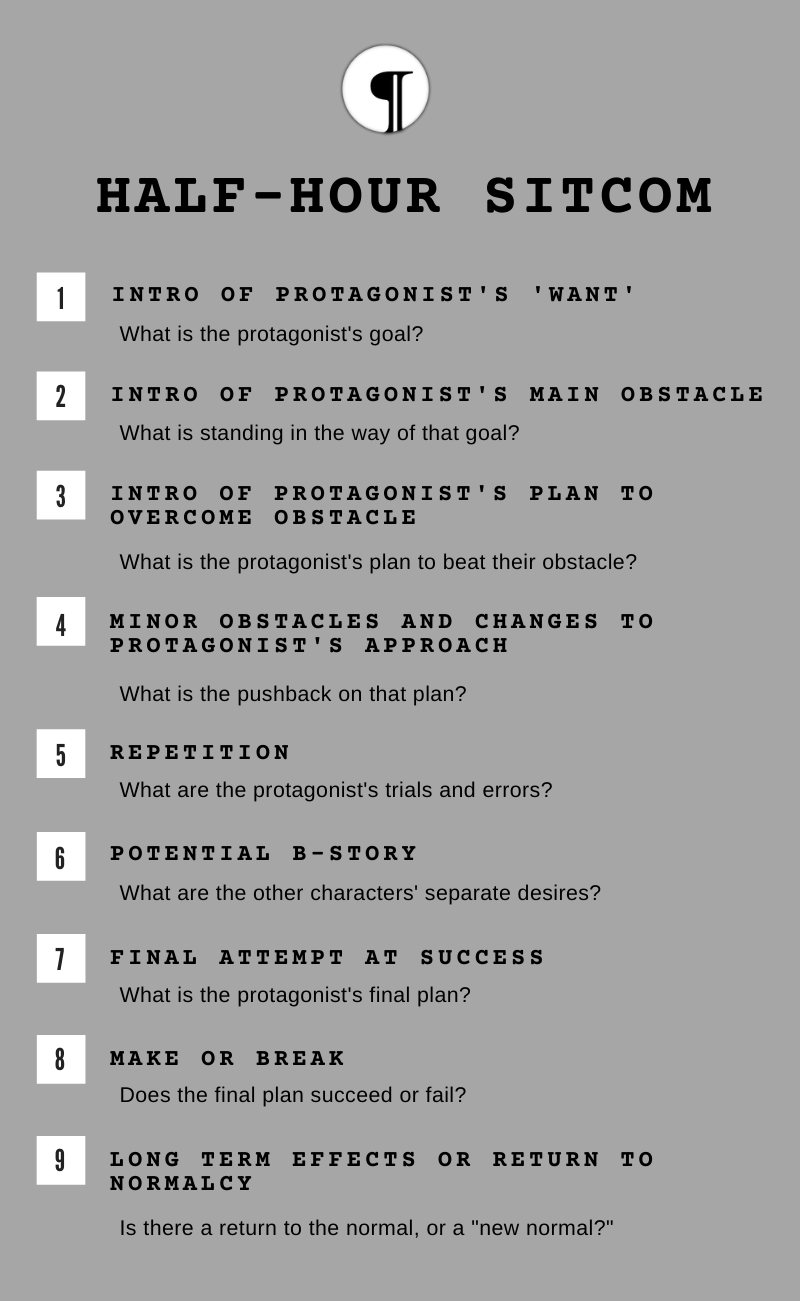 The Half-Hour Sitcom Formula is not accredited to any one person in particular. One could infer that since virtually every sitcom uses this formula, the first sitcom to air on television, Mary Kay and Johnny, would have created this blueprint for others to follow. That being said, the sitcom formula did not fully begin to take shape until the 1950s classic I Love Lucy hit the air. Since then it’s blown up, creating a foundation for TV shows like Seinfeld, Friends, Frasier, The Fresh Prince of Bel-Air, and Arrested Development. 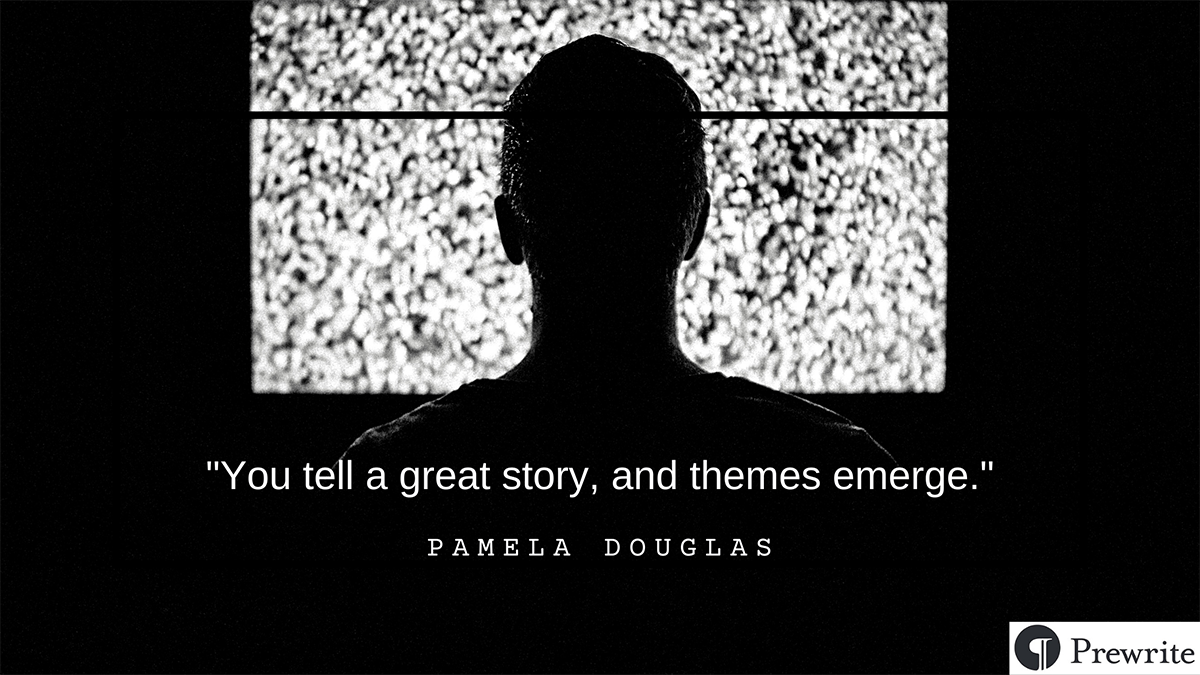 Sitcom episodes are almost always based around the protagonist’s simple desire to do or have something. The plotline is structured around that ‘want’ and shows the audience the plight they must endure in order to either succeed or fail in obtaining it. Generally, one can track the character’s process and progress by noting the key moments in the sitcom formula, those being:

4. Minor Obstacles (Sub-Obstacles) and Changes to the Protagonist’s Approach

It may seem like quite a lot to take in, but these pieces fit perfectly into each other. Let me explain.

In order to help make the breakdown of the Half-Hour Sitcom Formula a little more clear, I’ll take an example of an episode from the beloved sitcom New Girl. Let’s get into it!

Here, the writer will introduce the audience to the protagonist’s goal. What is it that they want? It doesn’t need to be super complex; merely something that they will face challenges in pursuing, and something that will test their character.

In a particular episode of New Girl, Jess has just moved in with Nick, Schmidt and Winston after leaving her unfaithful ex-boyfriend. She does not have many possessions as she’s left them all behind at her ex’s house. When she attempts to connect with her new roommates, she accidentally breaks the television and is forced by the guys to go to her ex-boyfriend’s house to retrieve the TV she left behind to replace the one she broke. Now faced with having to confront her ex to appease her roommates, she vows to get her stuff back.

What is standing in the way of the protagonist getting what they want? More often than not, the protagonist’s situation or circumstances prevent them from gaining immediate satisfaction. It’s important to have both a solid character ‘want’ and a strong obstacle that they face. These are the most important elements of the sitcom episode to establish. In Jess’s case, her obstacle in getting her belongings from her ex, Spencer, lies in the fact that she is afraid of returning and getting closure. She has been struggling to move on from him and therefore is terrified to go back to the house they once shared.

Here, the protagonist creates a plan to beat the obstacle they’re facing. Often, they assume that this solution will work right off the bat. Jess resolves to meet up with Spencer so she can pick up her things, and she finds him in the park. She plans on having a conversation with him to get closure and her things from the house.

4. Obstacles and Changes to the Protagonist’s Approach

Here in the formula/episode is when the protagonist encounters pushback on their plan to overcome their obstacle. Their plan is in one way or another foiled, giving the character the opportunity to push back against the problem and form another plan in a way that displays their most prominent and endearing character traits. In New Girl, Jess’s strongest personality quirks include her bubbly nature and ability to care for others to the point of letting them push her around. She meets up with Spencer and is unable to stand up for herself and insist she get her things back. He convinces her to instead give him and his new girlfriend a ride to the airport.

In sitcoms, the protagonist must struggle to get what they want through a series of trials and errors. The sub-obstacles they face repeat, giving the sitcom a quick-paced and humorous feel as the audience becomes more invested in the hero’s struggle and is entertained by their shortcomings. In New Girl, after failing to get her things, Jess then goes to a pawn shop to obtain a new TV and tries to steal one from the shelves of the store but fails to do so. She drives by Spencer’s house with her friends for moral support, but speeds up at the last minute, unable to stop at the house.

Often in sitcoms, due to the number of characters in the cast, there will be a B-story within the thirty minute episode. This usually involves one or two characters separate from the protagonist. In the B-story, the character(s) usually have a separate desire to the protagonist’s. They are trying to accomplish something as well, but their story may not be elaborated on as much. Using the example of New Girl, as Jess struggles to get her things from Spencer, Schmidt and Winston play mind games with each other in order to see who is the “top-dog” of the apartment. They fight over the size of their bedrooms and try to intimidate each other.

The protagonist gives it one final go at this point in the episode. They’ve failed perhaps twice, three or even four times, but they aren’t defeated yet. They make a final plan. This is it. Jess makes a plan with her friends to stop at the curb outside Spencer’s house and go in to get her things while her friends support her and encourage her.

It is at this point in the episode that we, the audience, will see the final plan either succeed or fail. This is a ‘make or break’ moment when the protagonist executes their final plan. It is usually here that the climax of the episode falls in a high-tension standoff between the hero and their obstacle. In Jess’s case, she goes to Spencer’s house and they briefly talk. It is looking as though Jess will cave and leave without getting her things from him, but then she sees a plant she left at the house dying of dehydration and realizes that Spencer does not care about her. She takes her belongings from his house, and with the help of her roommates, finally stands up for herself and tells him that she is glad they are broken up.

After the protagonist either succeeds or fails in overcoming their struggle, the story will finish with a return to normal or ‘new normal’. If they have succeeded, often things will end with them resuming their life as it was before. If they have failed, then a new normal is often established. They must cope with their loss and move on. In New Girl, Jess leaves Spencer’s house having collected all of her belongings. She spends time with her roommates as they watch television on the TV she picked up from the house and is happy not only with the closure she’s gotten, but also with the close bonds she’s formed with the people she lives with.

And that’s all there is to it! With this formula, writing your own sitcom doesn’t have to seem daunting, and you can create episode after episode, each unique and engaging. If you switch up the obstacles and dialogue, your show should never feel stale or repetitive, even if you use the formula for every single one.

This formula works fundamentally because it gives a tried and true foundation for writers to build the groundwork of a sitcom episode. It allows the pace of the dialogue and action to fall neatly into a 20-30 minute package without seeming rushed or forced, and it, much like films, gives the story a sense of a beginning, middle and end. With sitcoms, it can be easy to fall into the trap of writing episodes that don’t have as much of a plot focus to them, but with the sitcom formula, the skeleton of the story revolves around the idea of there being an obstacle and attempted solution(s) every time. Furthermore, it gives the audience the ability to see their beloved sitcom characters facing challenges that will develop their personalities and relationships with other characters in new ways. Since the formula is simple and broad, it gives writers the space they need to fit the pieces of their episode plotlines into place while still making them exciting and unique. This formula isn’t an exact science; it can be followed in many ways, and the ways it can be applied to a story are ambiguous enough that it doesn’t limit the potential of the sitcom to a series of practically-identical episodes. 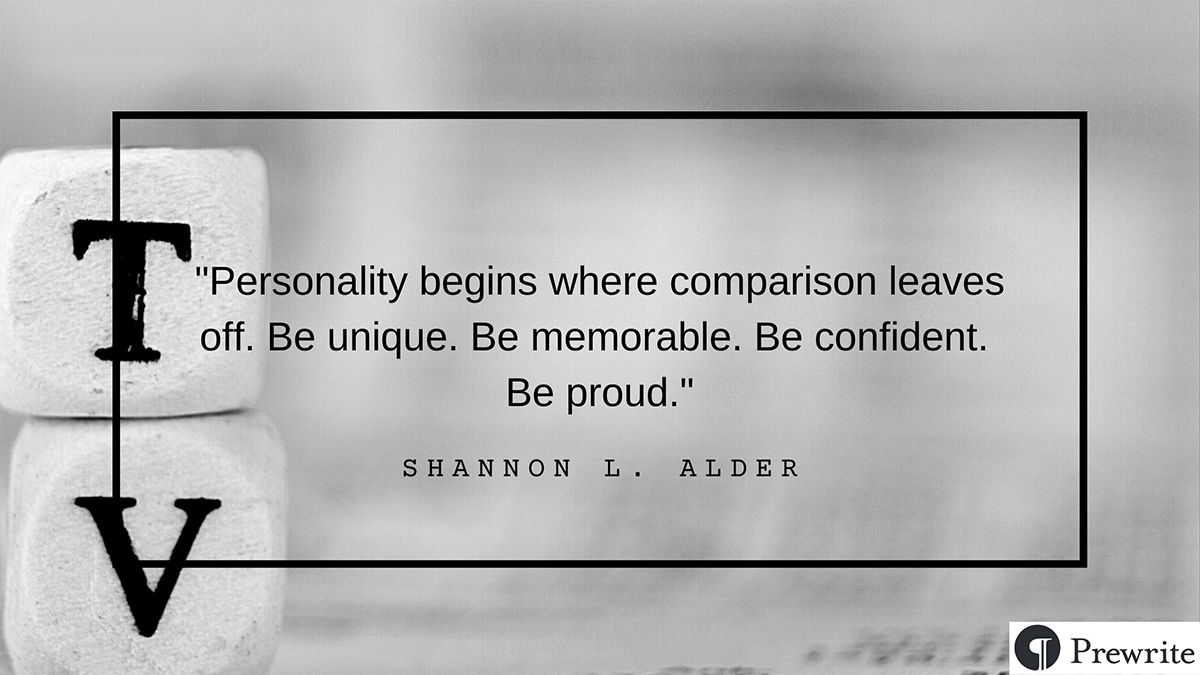 Where this strategy tends to fall short is when it is followed only one way every time. For example, if I were to write a sitcom series about a budding chef, and each episode touched on a new dish they were struggling to cook and their journey to master the food, my audience would get bored of it in a hurry. Writers of sitcoms must always be thinking of innovative ways for them to apply the sitcom formula to their work so that they can write material that doesn’t feel stale, overused or bland. If you find yourself stuck in this rut, try watching an episode or two of a sitcom you enjoy, and see if you can spot this formula within the episode. You may be surprised how different two sitcom episodes can be while following the same blueprint structure!

# Which shows use it?

There are hundreds of sitcoms that people all over the world know and love. Here are a handful of the most popular and acclaimed.