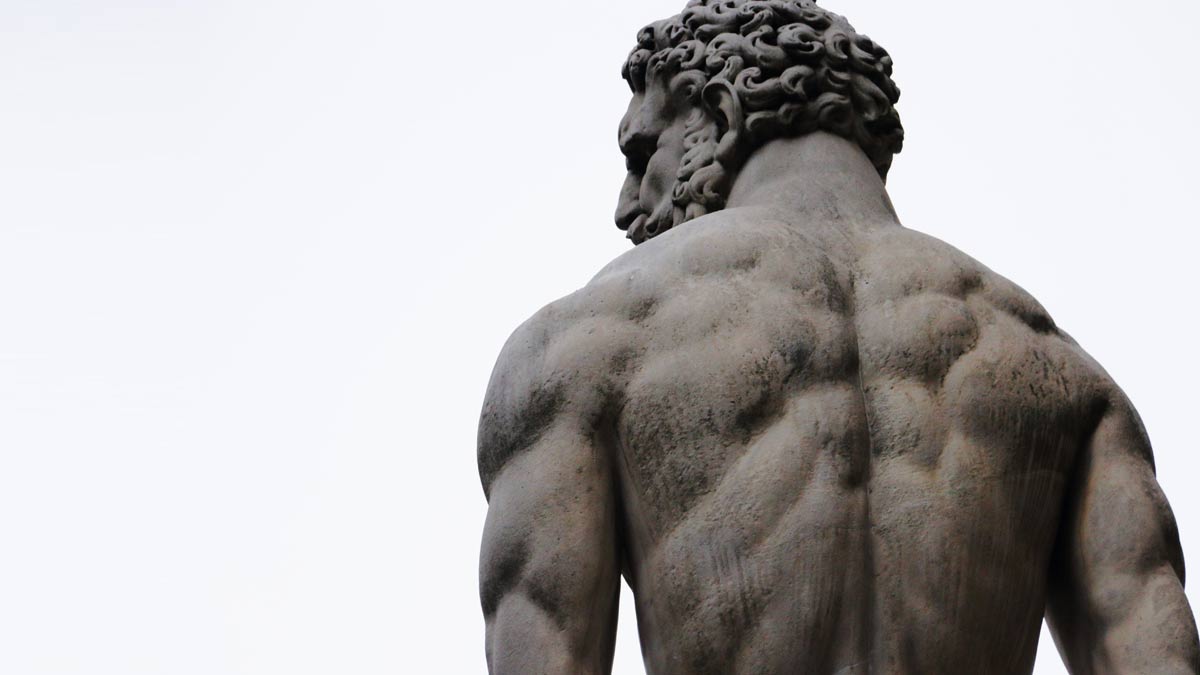 Hero’s Journey is a classic, mythical story structure broken down into 12 stages. Also referred to as the “monomyth,” Hero’s Journey functions as a circular model, meaning the hero’s physical trek will typically end right where it began. Although writers use several variations of this structure, we will be delving into the 12 step paradigm that makes for a compelling film your audience can’t look away from.

Obviously, this structure is great to work with if your story’s main character will literally be leaving home on an adventure. However, once you get Hero’s Journey down, you’ll be able to identify and apply it to several scenarios. With Prewrite’s help, you’ll find the possibilities are simply endless. 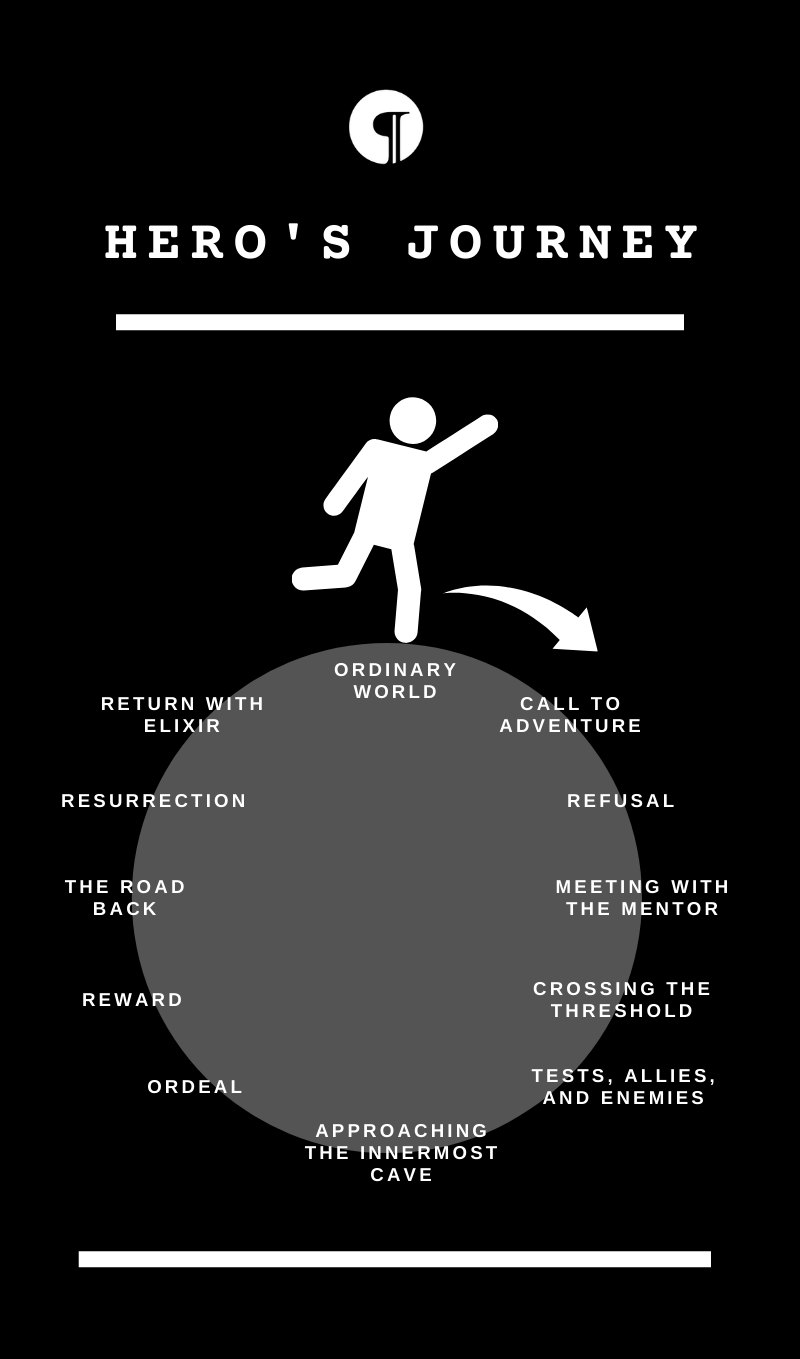 American author Joseph Campbell was the first to conceptualize Hero’s Journey as a structure in his 1949 work, The Hero with a Thousand Faces. He theorized a story’s main character as the chosen one who embarks on a treacherous journey, ultimately responsible for the fate of others.

Campbell’s original paradigm consists of 17 stages. In 2007, however, Hollywood executive Christopher Vogler condensed the structure into 12 steps in his book, The Writer’s Journey: Mythic Structure for Writers. 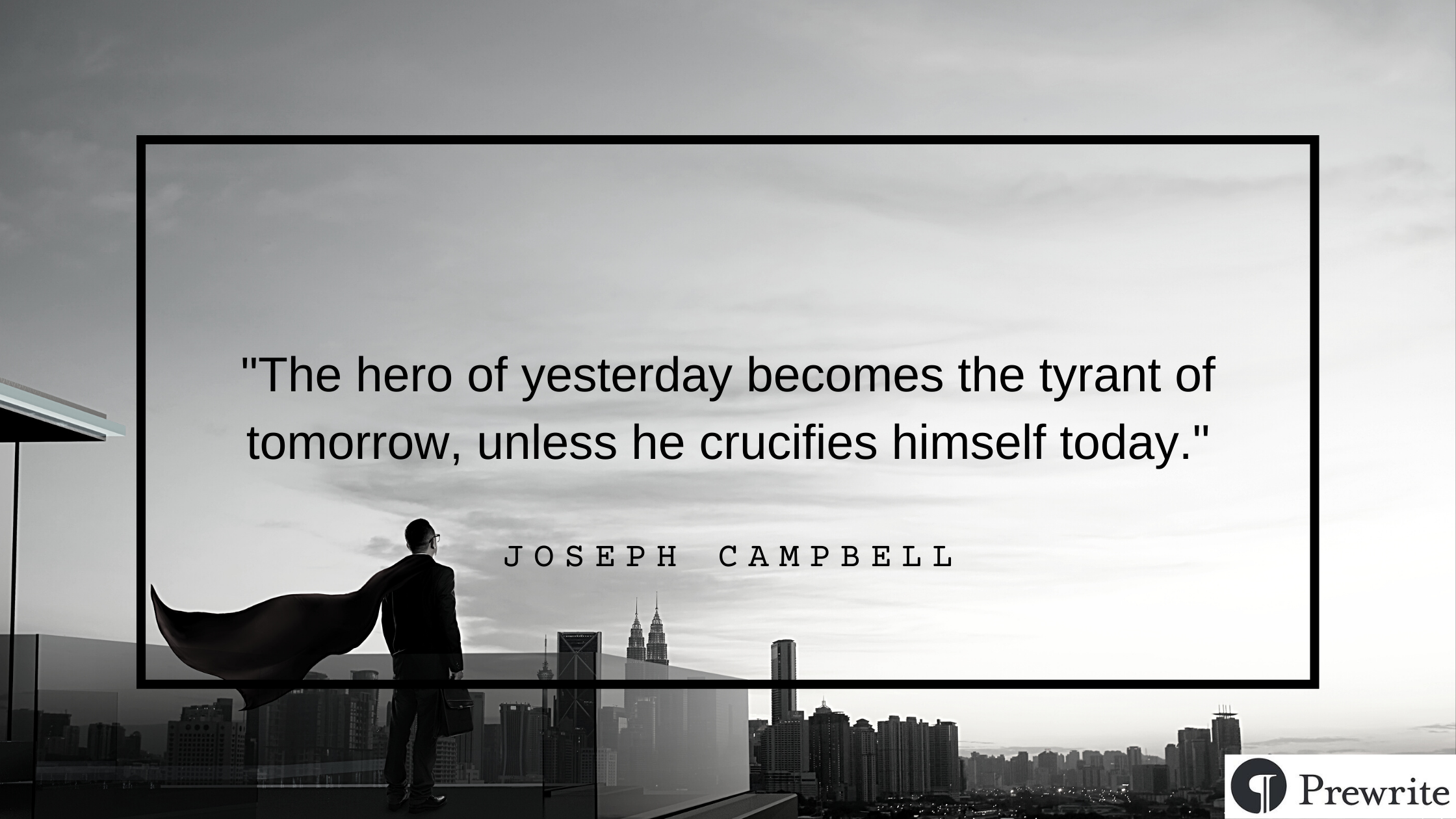 Hero’s Journey is a story we’ve all seen many times over in countless novels and films. As previously mentioned, we’ll be exploring the 12 phases in this iconic model. Are you feeling heroic? Great! Let’s begin...

Hero’s Journey starts out in the main character’s ordinary world. Here, the hero’s mundane, everyday life is established, and we’re given a sense of normalcy before the adventure begins. In this world, not only do we learn details about the hero and how they live, but we also discover why they’re unsatisfied with current circumstances. The audience should be able to identify, and later empathize, with the hero.

In J.K. Rowling’s 2001 film Harry Potter and the Sorcerer’s Stone, we meet Harry Potter in his ordinary world. He lives with the Dursleys, who force him to sleep under the cupboard.

Now, the hero is faced with an inciting incident or conflict that drives them into their journey. This interruption should present the main character with an opportunity to leave the comfort of their ordinary world - a challenge or quest must be undertaken.

Harry Potter’s call to adventure occurs when owls start delivering letters to the Dursley house, inviting Harry to attend Hogwarts School of Witchcraft and Wizardry. Eventually, Hagrid shows up to tell Harry that he is a wizard.

Initially, the hero will refuse to accept the call to adventure for any number of reasons. Perhaps they fear the dangers of the unknown, have personal doubts about their skills, feel duty-bound to remain where they are, or simply do not believe they are worthy of adventure. Whatever the case may be, the hero eventually accepts the call.

In Harry Potter and the Sorcerer’s Stone, Harry initially doesn’t believe Hagrid. He believes there is no way he can be a wizard. He refuses to leave his ordinary world.

# Meeting with the Mentor

After accepting the call to adventure, the hero encounters a mentor, or a supernatural aid, to ready them for the feat ahead. We clearly see that the main character needs guidance and advice in order to embark on their journey. Typically, the mentor will provide the hero with some training or tools to aid in the quest. This will dismiss all doubts, and give the hero enough courage and self-confidence to continue.

After Harry’s eventual acceptance of the call, Hagrid, his mentor, brings Harry to Diagon Alley to retrieve the required supplies for Hogwarts.

When the hero finally lets go and leaves their ordinary life, they cross the threshold into an unknown world. Whether they like it or not, the hero is now ready to act upon the call. This phase signifies the hero’s wholehearted commitment to the journey and whatever events lie ahead. There is no turning back now!

After gaining knowledge and insights from Hagrid, Harry finally crosses the threshold into the new world on the Hogwarts Express.

Here, the main character learns the rules of the new world they have encountered. We quickly find out who can be trusted, and who cannot. The hero faces trials and challenges, meets companions, and comes face-to-face with rivals. No matter what is thrown their way, the hero must refine their skills to overcome every obstacle and carry on toward the ultimate goal.

Harry discovers tests, allies, and enemies during the Sorting Ceremony. He ultimately chooses to join the House of Gryffindor, where he faces many challenges throughout his first school year.

Next, the hero’s initial plan to take on their main conflict begins. They must ready themselves before taking the final plunge into the unknown. Within the innermost cave, setbacks will occur, but the hero must overcome with alternative approaches.

Together with Ron and Hermoine, Harry approaches the innermost cave on a magical adventure under the castle to keep Professor Snape away from the Sorcerer’s Stone.

After leaping further into the unknown, the greatest challenge yet is introduced. Thrown in the main character’s way are more obstacles they must face in order to survive or save their new world. The hero must draw upon everything they have learned to face this crisis where everything is put on the line. As a result, the hero gains greater insight needed to reach the journey’s end.

On their adventure, all three students encounter dangerous ordeals, ranging from a three-headed dog to murderous chess pieces, which hinder them from obtaining the Sorcerer’s Stone.

Having survived the ordeal, the hero is gifted with a reward that allows them to take on the main conflict. They have finally overcome their greatest personal challenge, and are ultimately transformed into a stronger person.

When Harry enters the chamber where the stone is hidden, he realizes that he has been rewarded with it already in his pocket. Knowing he is worthy of such a prize, Harry gains self-confidence.

Now, the hero sees a light at the end of the tunnel, oblivious to more challenges ahead. Their journey is not over just yet. The hero must commit to the final stage of the journey before they reach their ultimate destination.

In the road back, Harry learns that Lord Voldemort has possessed Professor Quirrel’s body in order to steal the Sorcerer’s Stone and murder Harry. He must outsmart Quirrel to keep the stone away from Voldemort at all costs.

Here is the story’s climax. The hero faces a final test to take on the conflict once and for all. In the most dangerous encounter of the journey, the weight is heavy upon the hero’s shoulders to succeed. As the audience, we feel connected to the main character, and we too feel part of the conflict.

Harry discovers that he has the power to defeat Professor Quirrel, and thus Lord Voldemort… for now. He is able to destroy Voldemort simply by touching Quirrel's body. On the verge of death, Harry is ultimately resurrected, waking up a few days later in the infirmary.

When the hero succeeds, they bring their knowledge and experiences back to the ordinary world where they started. They will return to the known world a changed person who has gained wisdom and faced terrible dangers. The hero looks forward to the start of a new life.

When Harry recovers and leaves the infirmary, he is publicly praised by Dumbledore, who awards points to Gryffindor for his bravery. He soon returns home to his ordinary world, a changed boy. Harry looks forward to his upcoming years at Hogwarts.

A widely recognized and beloved story structure, Hero’s Journey has been used in a myriad of successful films in Hollywood over the years. This simple yet effective model is framed in such a way that allows the audience to completely identify with and take the journey right alongside the hero. Fictional or not, the hero is not just another character anymore; they become a long-cherished legend in our eyes.

Hero’s Journey gives the main character incredible depth. As the audience, we live in their world. We know their hardships, we feel their emotions, and we face their conflicts. We want to defeat the enemies, and we sit at the edge of our seats wishing for our hero’s success.

Take it from us - there’s nothing like the feeling of falling in love with your hero. 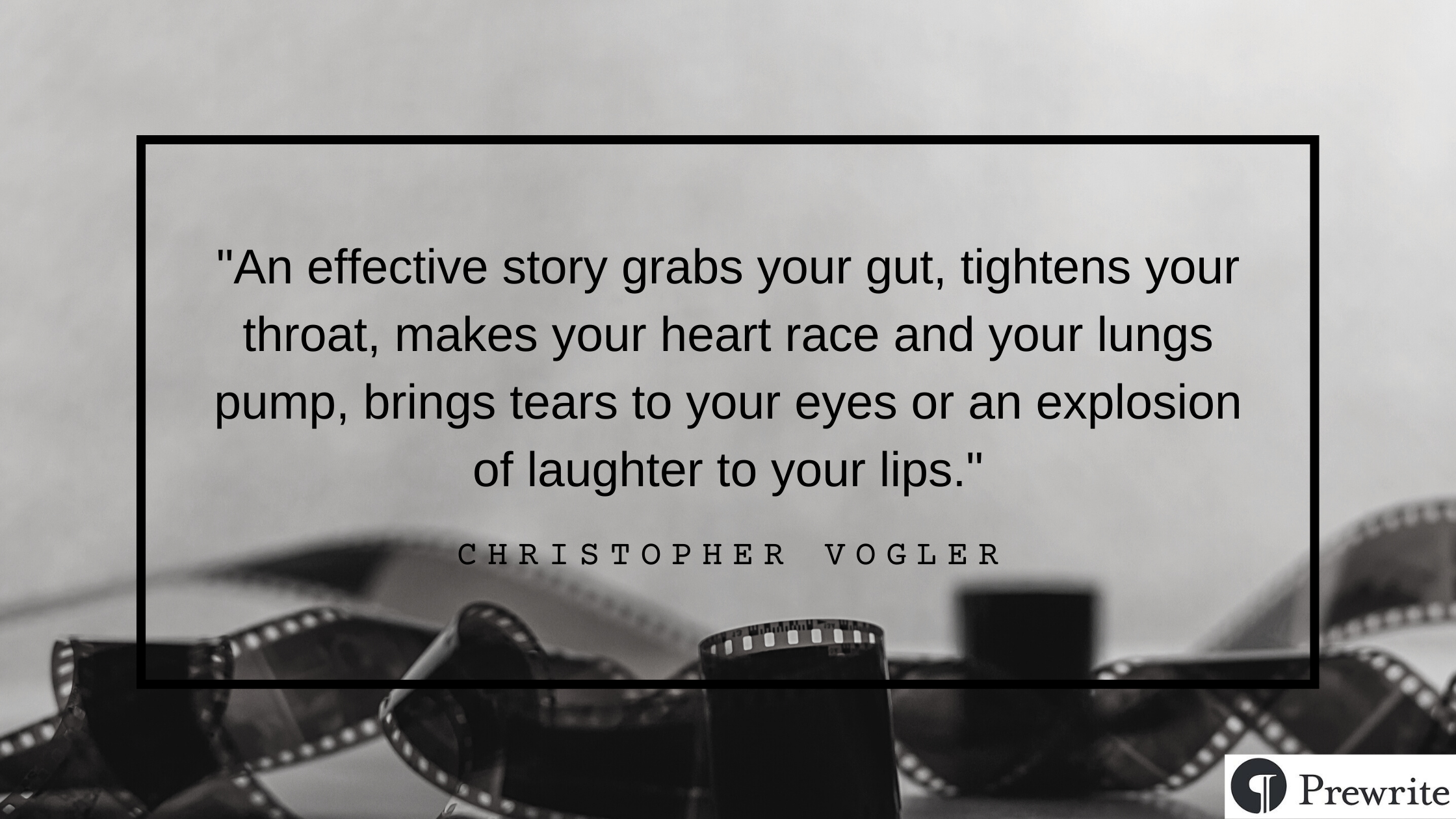 Even the strongest and bravest of heroes have their flaws, and the Hero’s Journey model is no exception.

For starters, as with many story structures, Hero’s Journey can discourage originality. Many will find themselves using a rigid checklist of elements they need to complete the structure’s formula.

Next, this particular model lacks an easily comprehensible foundation. You may be wondering, why does this pattern exist? What is the reasoning behind a hero moving outside of their known world just to return?

Another shortcoming of Hero’s Journey is that it may leave you wondering what made the hero so special in the first place. Certainly not everyone receives a call to action without having to work for it, right?

All are valid concerns. However, this is what creative storytelling is for! It’s made to present thought-provoking questions for us to answer ourselves. After all, where’s the fun without a little open-ended mystery?