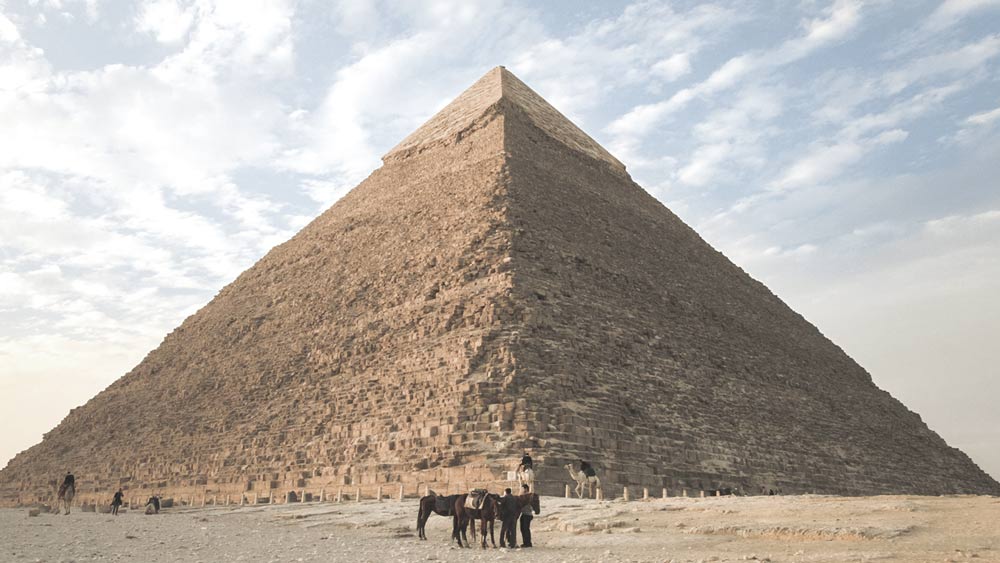 Freytag's Pyramid, or Freytag's Triangle, is a popular dramatic structure that specifies seven key elements of a successful narrative. Although some only acknowledge five elements, we're going to dig deeper and cover all seven.

According to Freytag’s Pyramid, a successful narrative includes:

We include this model as a tool at Prewrite, as it provides the basic building blocks of narrative structure. From comedy to tragedy, Freytag’s Pyramid is widely accepted among screenwriters, playwrights, and dramatists alike.

Importantly, the story arc of Freytag’s Pyramid helps the audience feel sympathy for the main character - the readers themselves are living in the story world and experiencing the character’s problems. As all of the elements unfold, an overarching theme to the narrative is revealed. 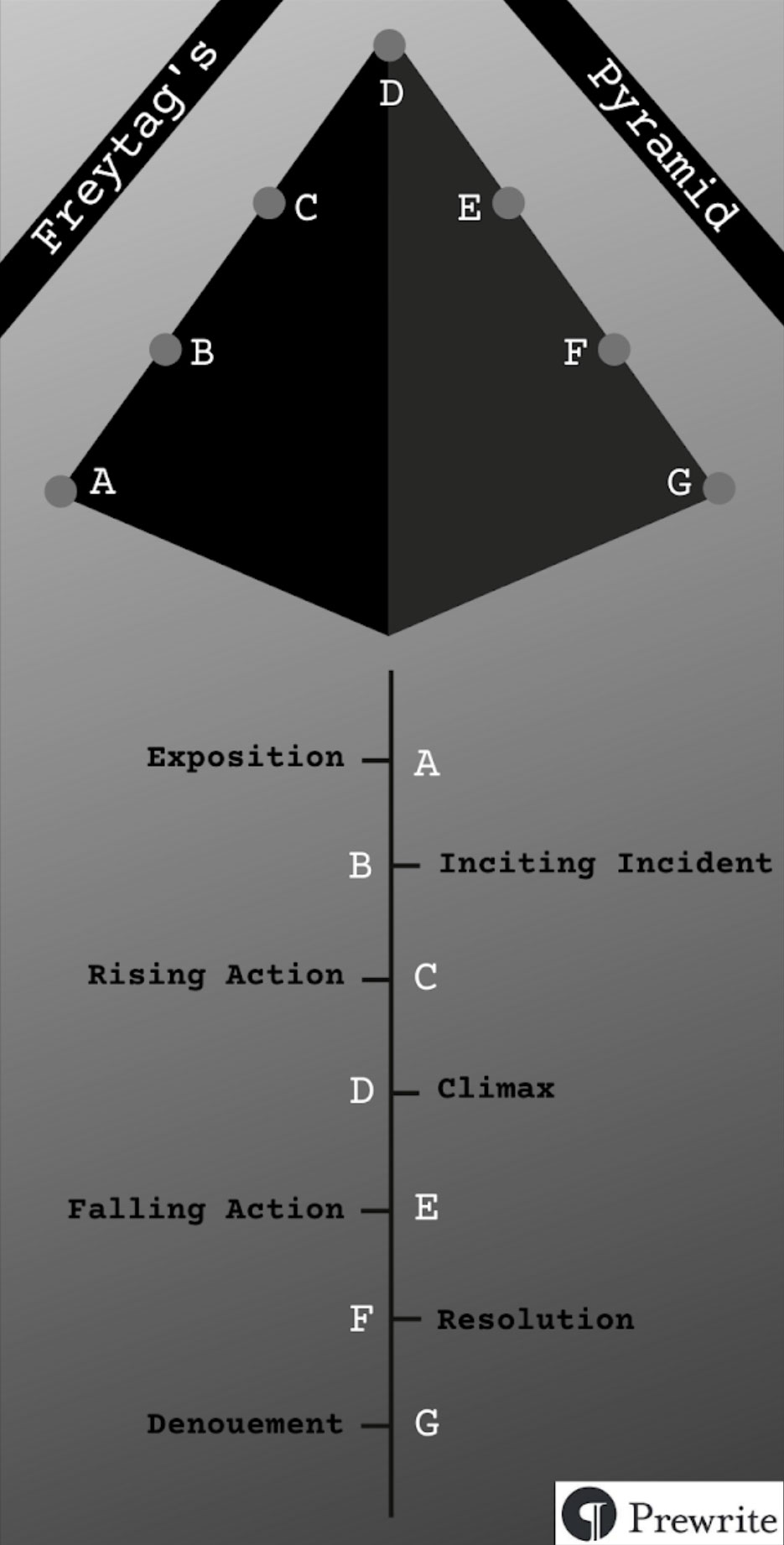 Looking all the way back to Aristotle’s work on playwriting, Poetics, we learn that a dramatic unified plot structure can be arranged like a basic triangle with a beginning, middle, and end.

In the mid-19th century, German playwright and novelist Gustav Freytag developed a modified version of Aristotle’s triangle in his work Freytag’s Technique of the Drama. With his addition of two new elements - rising and falling action - Freytag’s Pyramid was born. 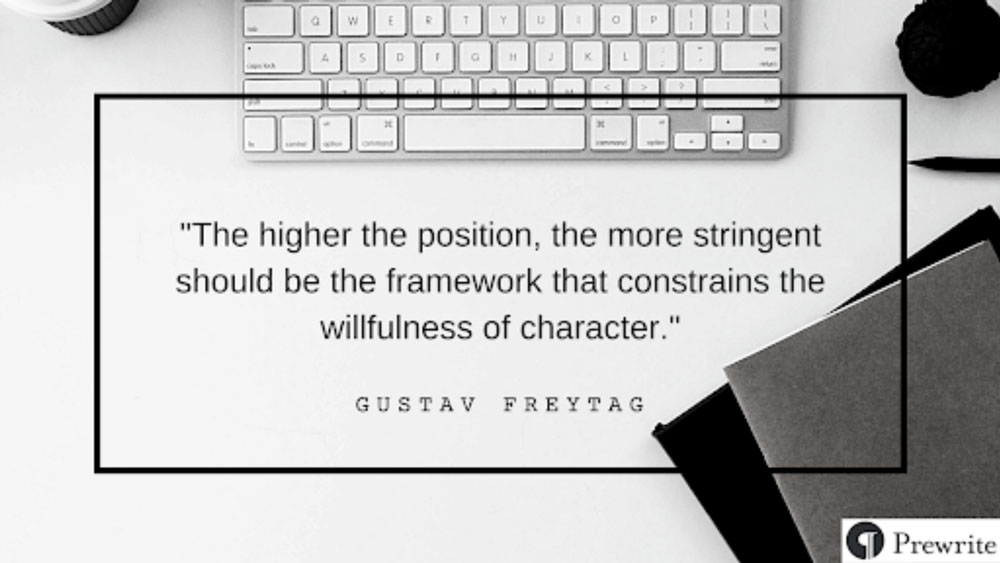 Again, we’re going to cover seven important story elements within Freytag’s Pyramid: Exposition, Inciting Incident, Rising Action, Climax, Falling Action, Resolution, and Denouement. Each event of the story should fit together for a unified, compelling film. This may seem difficult, but remember Prewrite is here to help! Now, let’s dive in.

Also referred to as the introduction, the exposition of the story is where we set the stage. Time to introduce the story’s setting, meet the principal characters, create the tone, and prepare for an inevitable major turning point.

As an example, in the classic 1939 film The Wizard of Oz, the exposition is portrayed when we meet Dorothy Gale, Auntie Em, and Uncle Henry on their farm in Kansas. The audience sees that Dorothy feels lonely and dejected, longing for more in life.

Next, the inciting incident, also defined as the complication or exciting force of the story, presents a problem thrown in your main character’s way. This will entail the antagonist ultimately forcing the protagonist into motion.

The inciting incident in The Wizard of Oz occurs with the arrival of a dangerous twister. Instead of taking shelter, Dorothy runs away after her dog, Toto, to save him.

Known also as the rise or rising movement, here is where the story builds, and more conflicts emerge for your main character. The major action has unquestionably begun, and additional characters should be introduced.

In The Wizard of Oz, after Dorothy encounters the Wicked Witch of the West, she embarks on a journey down the Yellow Brick Road with three companions, all seeking to meet the Wizard of Oz. This is the film’s rising action.

Here, your story reaches the point of greatest tension. Your main character arrives at a do-or-die moment where they must overcome the most difficult obstacle in their way. Some screenwriters refer to the climax as a point of reflection - if things are going well, they will fall apart; if things are going poorly, they begin to improve. At this point, you should portray your protagonist at their fullest energy.

In The Wizard of Oz, the climax takes place when Dorothy defeats the Wicked Witch by melting her with water. Dorothy claims her broomstick as proof for the Wizard that the Witch is dead.

Otherwise labeled as the return or fall, the falling action signals an ease of tension. As a result of the climax, there is an unavoidable change within the main character’s world. In most circumstances, this part should include a final moment of suspense.

For example, the falling action arrives in The Wizard of Oz when the Wizard’s balloon floats away, and he leaves Dorothy stranded in Oz.

Depending on the story, the resolution can also be defined as the catastrophe. While not always a happy ending, this event marks the solution of the conflict. Transformed by their journey, the main character either solves their problem, or finally comes undone by their previous actions.

In The Wizard of Oz, the resolution is depicted when Dorothy calls on Glinda for help. She learns that to get back home, all she must do is click her heels together three times and recite the words, “There’s no place like home.”

Finally, your story has come to a conclusion. The denouement should let your audience know that the main character’s journey has ended, and it should leave them with a sense of what comes next.

We reach the denouement in The Wizard of Oz with the comforting scene of Dorothy back home in bed, awake and safe with her family.

Freytag’s Pyramid is a lifesaver for inexperienced screenwriters who are trying their hand at story structure. Even if you’ve never heard of the specific name, you’ve probably inadvertently dealt with this model at some point in your life.

For writers who tend to focus all their attention solely on creating good dialogue and description, this is also where Freytag’s Pyramid swoops in for the save. It forces you to remember that your story needs a skeleton to survive.

Additionally, starting with an outline of seven elements, it’s easy to plan everything before you actually start writing. Think of this structure as your roadmap - your writing is sure to remain focused, and your story will be comprehensible for your audience.

Finally, Freytag’s Pyramid allows for the writer to optimize their story’s tension for the audience. Each event serves as a different stage of suspense. The model reminds you that the tension must rise, reach a peak, and then eventually fall back down.

Prewrite would never steer you wrong with a useless tool. 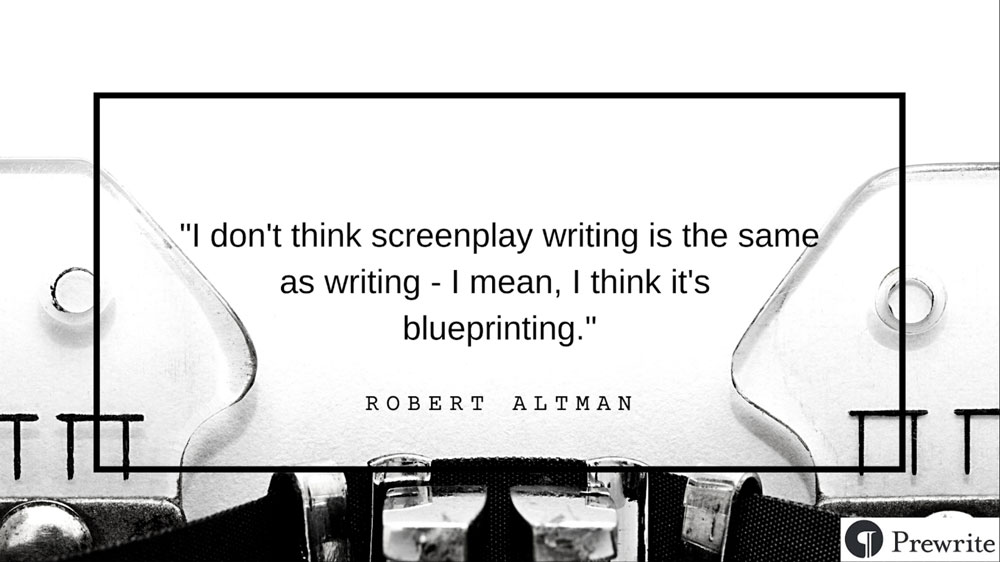 Some writers believe that while using Freytag’s Pyramid, they are too focused on measuring their story against its shape. You may quickly become discouraged if the middle of the story doesn’t seem to have enough interest.

Additionally, it’s easy to get annoyed with the rising and falling actions of the story. You may be thinking, why pay so much attention to these events if the climax is the most important part? Patience is a touchy subject when it comes to screenwriting, but again, all of these elements eventually merge into the masterpiece that is your film.

Remember that story structure is there to help you, not hold you back. It’s like that supportive significant other that pushes you to follow your dreams. Open up, and let it in.

Like we said before, you’ve probably read, watched, or even created a narrative following the classic Freytag’s Pyramid structure.

We’ve already dissected The Wizard of Oz, so check out a few more of our other favorite film examples:

Check out how to bring your story idea to life with Freytag’s Pyramid at prewrite.com!